Pretty impressive, isn't it?
It is worth to notice that this ball's water absorption almost does not exist. It means the ball is virtually waterproof; therefore its performance characteristics in dry or wet conditions should be almost identical.

One more test performed on the Adidas Teamgeist:


The Robotic Leg
The Adidas football laboratory in Scheinfeld, Germany, features a high-tech robotic leg, which is used for a variety of ball tests. The machine is able to repeat an identical kick in the exact same angle and with exactly the same speed and power, time and time again. Extensive tests conducted with the robotic leg show that the new Adidas Match Ball is 30% more accurate than top competitive balls tested. A high-speed camera is set up parallel to the impact to analyze the impact on the ball. The new 14-panel configuration, featuring fewer seams, makes the ball perform significantly more uniformly, no matter where the ball is hit.

What do players think?

Besides scientific tests, the new ball was also tried on the field by few professional soccer clubs. Here are the opinions about this ball of some well-known players, released by FIFAworldcup.com:

"Just using it in training, all the players at Real Madrid have been impressed. With the ball's movement, it doesn't go off everywhere, it goes where you want it to go and that's important. Your passing, controlling and shooting of the ball - it's in one direction and that's what you need."
David Beckham, Real Madrid

"You have the old-style colors which remind us a bit about football's history but also the modern technology, so you have a blend of the future and the past."
Kaka, AC Milan

"When you kick it, it goes in the right direction which sounds obvious but is really important."
Zinedine Zidane, Real Madrid

I would like to add one more interesting thing about the new Adidas Match Ball. It is the first ball ever to feature a complete under-glass print technology, providing the Teamgeist with the best and strongest surface material ever and guaranteeing the ball is more durable and will hold its unique look much longer.

Back to the top of Adidas Teamgeist page

Interact with us
Create your own Web page
Share your opinion, advice, experience and tips

Topic of the Month 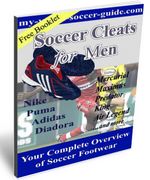